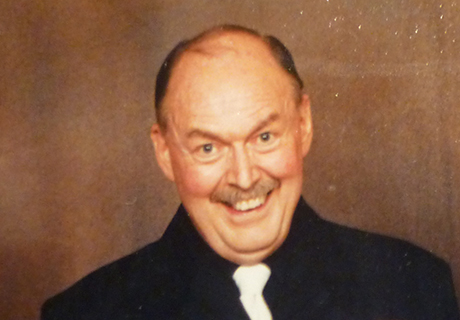 As you know, music was Fraser’s life’s passion. He began singing in the Toronto Boys Choir at age 6 where he made his debut on a record album. At 16, he moved to Scottsdale because of his arthritis. That was where he was introduced to Barbershop Harmony. He graduated from Arizona State University with a degree in Music Theory and Composition. Although his career was in computer software, he used his degree in his church and Barbershop arrangements.

Fraser followed his passion of chorus and quartet singing most of his adult life. He sang in shows all over the United States, and he attended competitions and conventions for many years. These last few years, his health did not allow him to travel. Eventually, he was not strong enough to sing.

Because of COVID-19, Kacy and I have decided that there will be no public celebration of life. If you wish to honor his memory and love of music, please send a donation to Harmony Foundation International. Donations in his honor will be used for music education for children/youth. Simply enclose a note saying “In honor of Fraser Brown - gift to be used for music education” and mail it to:

Or online at: https://www.harmonyfoundation.org/rick-taylor
Scroll down to check the tribute gift box. In the comments box you can state “In honor of Fraser Brown.”

Fraser first started treating his kidney failure just before Kacy’s wedding in 2013. He was able to do peritoneal dialysis at home every day for almost 7 years (an amazing record). Over the last few months, the procedure was unfortunately not doing its job. He did not want to go on hemodialysis, so they tried several different medications and solutions. After gaining 30 pounds of water weight, he had no choice.

During these months, we decided to sell our home and move to a retirement community nearer to our daughter. In mid-July, we moved to Fellowship Square Mesa. The people here are wonderful – both the residents and the staff. It has been a blessing. The dialysis center is near the property instead of the 20 minute drive we were used to.

As we were packing and moving, Fraser went to the emergency room for congestive heart failure. He was in the hospital for four days. Because of COVID restrictions, we could only communicate over the phone. It was frustrating and stressful. After we moved, he continued to fail. During those five months, he enjoyed seeing his grandsons every week. They made him laugh every time. We saw Kacy on her birthday and celebrated Thanksgiving. It was a day of good memories. On December 1st, we called EMT’s because he could not get up; he was coughing and very weak. We only talked on the phone after he was taken to the emergency room. He spent a week in the hospital and more than a week at a rehab center. There were no visitors allowed in the rehab center, so again, we could only communicate by phone.

On December 17, I got a call that he was going back to the emergency room. Congestive heart failure, pneumonia, and COVID were too much for his body. Kacy and I were together when the doctor called that afternoon. He passed peacefully to a better place to spend Christmas.