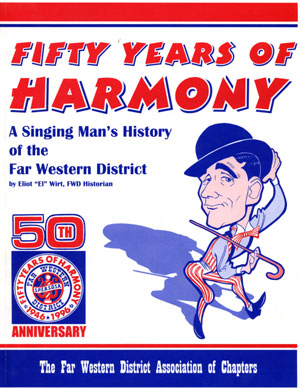 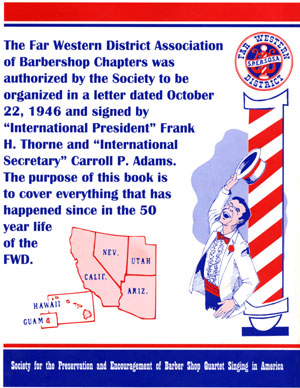 A Singing Man's History of the Far Western District

The Far Western District Association of Barbershop Chapters was authorized by the Society to be organized in a letter dated October 22, 1946 and signed by "International President" Frank H. Thorne and "International Secretary" Carroll P. Adams. The purpose of this book is to cover everything that has happened since in the 50 year life of the FWD.

Written by Eliot "El" Wirt, photo archives by Joe Salz, and edited by David Melville, this book was originally published in September 1998, and a copy was mailed to each member of the FWD. This revised, on-line edition was published in March 2006 by David Melville, adding colorization to the original artwork and rendering the document in "pdf" format.

The book is available for you to download and enjoy. The entire book in a single document is approximately 16 Mb, so for those of you with slower internet connections, you may prefer to download the individual sections.