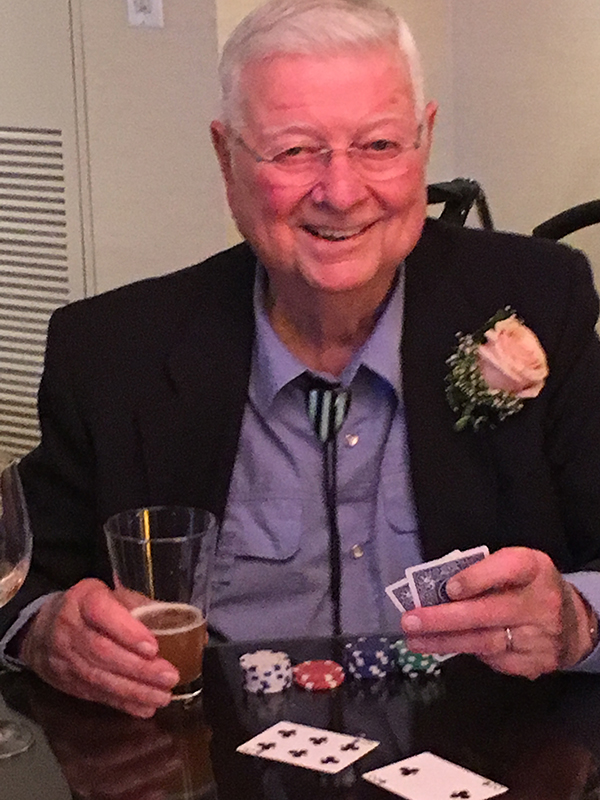 Joseph A. Salz, age 90, known far and wide for his good humor and his pure singing voice, passed away Oct. 25, in Gilbert, Arizona. Joe was a loving husband to Jean for 62 years, until her death in 2014. Together they had eight children, who were raised to know that family is everything, to live with honesty and integrity, and that it is best not to sweat the small stuff.

Joe was born in 1930 in Dubuque, Iowa and moved to Arizona in 1950. He lived in the Phoenix area most of his life, with a few years in Southern California and later, Sacramento. His career successes included sales and managing credit unions. Joe was also a lifelong, card-carrying Diehard Cubs Fan.

Joe Salz first joined the Barbershop Harmony Society (BHS) with the Hollywood Chapter in 1948. He sang lead as a member of an organized quartet for most of the next 72 years. Dad won the Far Western District (FWD) Championship with the Desert Knights (1957) and Stage Four (1972); his quartets qualified to compete at the international competition many times, with his highest placement being 11th in 1964 with the Coastliners. He also was an International BHS chorus champion with the Phoenicians in 1972. Joe was inducted into the FWD Hall of Fame in 2002, not just for his singing, but for many years of service to the FWD and his local chapters, such as Phoenix, South Bay, Sacramento, and Sun Cities.

In barbershop, Joe was most proud of performing with the Desert Knights. Joe, Chuck Rastatter(best friends since 1936), Sam Aramian (FWD and BHS HOF), and Lloyd Steinkamp (FWD and BHS HOF), were registered as a quartet just shy of 50 years when Lloyd died in January 2007. The Desert Knights were one of the most popular barbershop comedy acts ever, performing in shows all over the USA and Canada, up until receiving a standing ovation in their last show in 2005. In their last years, they were joined on stage with the Knight Nurses (their wives), who provided first aid during performances with comedic effect. Along with their (many) children, the Knights were one big family of love. Joe was never happier than when surrounded by family and friends, playing cards, enjoying a martini, and woodshedding with other barbershoppers. This past January, he was able to do just that as many turned out for his 90th birthday party. The only thing that would have made the day better was to have Jean at his side.

A celebration of life is being planned for January. Memorial donations can be made in Joe’s name to Harmony Foundation International. Messages to the family may be left at Ever Loved.

Joe was always ready with a smile, a joke and a song. In Joe’s memory, please do something unusually nice for yourself: have a top-shelf drink, tee it up at a great golf course, enjoy a meal at a fine restaurant, or have a macadamia nut banana split for dinner! Your happiness is the best way to honor Joe’s memory.