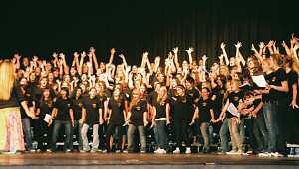 The Third Annual Tucson and Southern Arizona Youth in Harmony Festival was held on September 6th, 2008 at Sahuaro High School in Tucson. Attending were 265 young men and women representing 15 local and regional high schools, a few traveling as far as 275 miles to attend.

The years festival committee consisted of 18 individuals representing the Tucson Sunshine Chapter of the Barbershop Harmony Society (BHS) and the Tucson Desert Harmony Chapter Sweet Adelines International(SAI). This group was led by Ron and Annie Hayes. Ron is the Youth in Harmony VP for the Tucson Sunshine Chapter, Annie the YWIH Coordinator for the Tucson Desert Harmony Chapter, and, Region 21, SAI, YWIH Program Manager. Members of both chapters assisted in various functions throughout the festival. 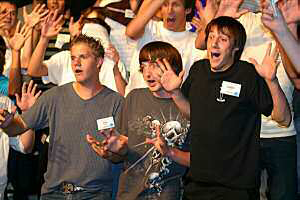 As in the 2007 festival, Connie Keil and Charla Esser, with the help of quartets Sonoran Sound, The Eastsiders, and Havin' a Blast, conducted the day-long workshops and performance. Tucson Barbershop eXperience Director, Jeff Dolan, as Program Chairman, was assigned the task of placing the 265 singers on stage in performance, a task not easily accomplished. It was very well executed, as seen in the program finale. Tucson Desert Harmony Director, Dayle Ann Cook, and Assistant Director Karen Meade, were the choreographers who aided in the students' visual presentation.

Even though the day had an early start (8 a.m. on a Saturday), everyone involved thoroughly enjoyed the activities of the next 8½ hours. After receiving and introduction to the day's activities, the students were introduced to the coaching quartets, who each performed one song from their repertoire. The young men and women then separated and began to learn the music of two songs for each group.

After a noonday lunch of pizza, which the students obviously enjoyed, they returned to work on an 8-part arrangement of Lida Rose/Will I Ever Tell You to be performed at the late afternoon show. They were also treated to videos of BHS and SAI youth quartet and choruses. During a mid-afternoon break the students received their commemorative t-shirts which served as their performance uniform. This was followed by their return to the stage for a dress rehearsal. Following the rehearsal they filled out evaluations and participated in a Q&A wrap-up session with the clinicians. Finally, it was on to the stage to perform to a packed audience of friends and family.

The three teaching quartets appeared on stage between the choruses, in order to facilitate move the young men and women on and off stage behind the curtain. 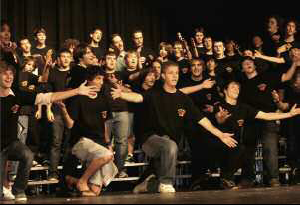 The first chorus to appear was the young men, who performed Crazy 'Bout Ya Baby and Let There Be Peace on Earth. The young women's chorus performed In My Life and Orange Colored Sky. With the opening of the curtain for the finale, the audience was overwhelmed by a chorus that encompassed the entire stage. This presentation was the mass chorus of the young men, and women, along with the teaching quartets. It was a magnificent performance, drawing a standing ovation.

Response from the evaluations indicated the students loved the music, the singing, meeting new friends and singing in a large chorus. They loved barbershop, had fun, and want more! The teachers responses included: "student increase in confidence", "excitement", "student interest in quarteting", "reinforced concepts of pitch, projection, diction, breath control and focus", "a new style", and more.

Do you have an active YIH program? Try it, it works.

Connie Keil and The Eastsiders Quartet instruct the boy's chorus 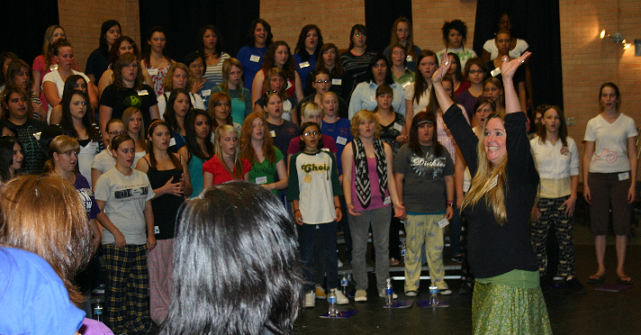 Sonoran Sound teaches a song to the boy's chorus